Naresh enjoys fooling around with Roshna in his college classrooms, but both of them want to go further. When Roshna suggests a movie, Naresh is ecstatic—finally, his fantasies can come true. However, they must be careful to avoid detection. Will Naresh and Roshna make their first time one to remember?

Ranjit begins his freshman year at IIT Bombay with concern for the customary hazing of new students. When he meets Savitri and her roommate Veena, however, the practice takes on a new meaning. Will Ranjit have the courage to confess that it’s his first time, before Savitri and Veena carry out their plan? 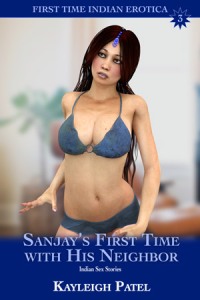 Sanjay has no luck with the women at his college and obsesses about his attractive, divorced neighbor, Ruby. She’s a successful fashion designer, and Sanjay has no hope of his fantasies evolving into anything more. What will he do when Ruby asks him for a special favor? 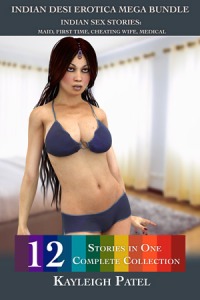 This collection of 12 spicy Indian stories is sure to have something for everyone. The explicit tales cover a variety of situations, including sexy Indian maids and their employers, college students’ first-time experiences, bored housewives who cheat on their husbands, and doctors who provide very personal services. The bundle contains four collections with three stories each.